This book is not included in your subscription.

A comprehensive guide to hard-surface modeling, procedural texturing, and rendering 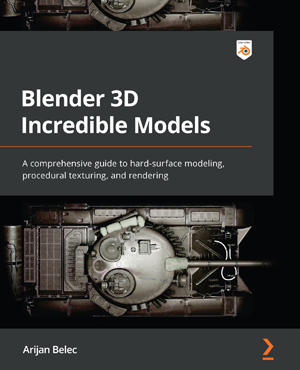 Learn all about hard-surface modeling in Blender while creating three increasingly complex projects: an assault rifle, a sci-fi racing ship, and an army tankKey FeaturesExplore Blender's wide array of 3D modeling tools and features with key images printed in colorLearn techniques for texturing,

Learn all about hard-surface modeling in Blender while creating three increasingly complex projects: an assault rifle, a sci-fi racing ship, and an army tank

Blender is a massively popular and powerful 3D program, with versatile modeling abilities that make it a great way to enter the 3D modelling world.

Blender 3D Incredible Models is an extensive guide for those new to hard-surface modeling with Blender, helping you understand the complete range of tools and features it offers and how to employ those efficiently to create realistic models. You'll be led through progressively more challenging modeling projects— from an assault rifle and an army tank to a sci-fi spaceship model—giving you a glimpse of all the skills you'd need in Blender's vast ecosystem of features and functionality, ranging from textures, rendering, and UV mapping to lighting, rigging, and beyond. Each engaging project builds upon the last until you're equipped with everything you need to tackle your own modeling challenges, whatever they may be.

By the end of this Blender book, you won't just know how to create the models covered here, but you'll be able to turn your own concepts and references into 3D Blender models too!

What you will learn

Who this book is for

This book is for aspiring 3D artists, animators, architectural visualizers, and game developers looking to learn hard-surface modeling, an essential skill in creative industries. A basic understanding of Blender and its interface, orienting in the 3D Viewport, creating and moving objects, and mesh editing is necessary to get started.